In Luxiot we work with the most innovative technologies which also are the most advanced in the IoT market.

– Low consumption wireless technology
– High sensitivity, up to -146dBm
– Low emission power, up to 20dBm without Amplifier.
– Links up to 166dBm, high reach in bands without license.
– Bidirectional.
– Up to 256 bytes information packets, allowing IPV6 protocols
– Up to 10dB better than GFSK before interferences.
– High immunity to interferences. Excellent IIP3 (third order intermodulation product).
– Blocking immunity according to ETS 300 220 up to 100dB.
– Orthogonal codes, allows the coexistence of different communications at the same time.
– Low consumption 10mA in reception with “Low duty cycle” reception modes
– Frequency range from 137 to 960MHz, making possible synthesizing any frequency.
– The result is a highly efficient long reach communication system permitting communication with battery-equipped devices.

It is the first open source wireless technology that allows communication between mobile devices or computers and other smaller devices (powered with button cell batteries). Designed to work using low energy.

Power Line Communications, also known by its acronym PLC, is an English term that can be translated by communications through the power line and that refers to different technologies that use the conventional electrical power lines of transmission to transmit signals for communication purposes.

PRIME is based on OFDM (Orthogonal Frequency Division Multiplexing) modulation, which has been chosen by electric companies for automatic counters.OFDM is a modulation technique that can use the permitted band of Cenelec A, B, C and FCC more efficiently with advanced coding techniques. Adding Viterbi and Reed-Solomon algorithms yields an additional 6dB signal-to-noise ratio.

The PRIME (PRIME = Powerline Intelligent Metering Evolution) alliance is focused on developing a non-proprietary, open and public solution that can support not only “smart metering” but also the complete connection of energy devices and measures, gas and water through the entire electrical network, from indoor and outdoor.

For this purpose the PLC technology is the most suitable in high density communications of nodes and electrical links. PRIME is based on OFDM multiplexing in the CENELEC band. More information can be found at http://www.prime-alliance.org. 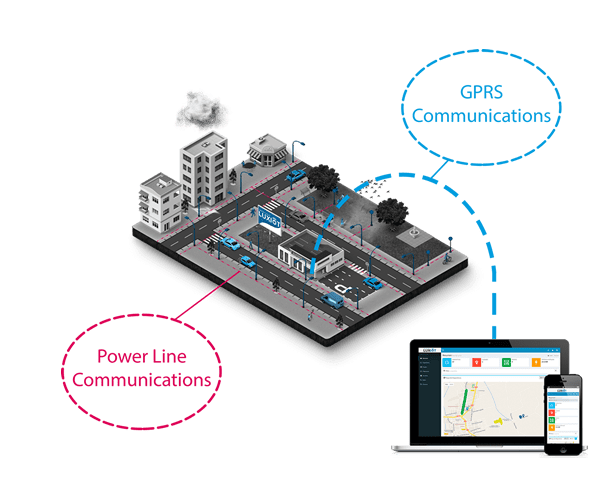 The acronym GPRS comes from the English words General Packet Radio Service (in Spanish General Service of Packs via Radio). In the 80’s, they were a great novelty, and although they have already been replaced ,or are being replaced, by 3G and 4G systems, they are still of great use in areas where third and fourth generation coverage is still incomplete.

The GPRS is based on the GSM voice transmission system, which was itself a worldwide revolution, allowing to communicate via satellite, without cables or physical connection to two mobile terminals (GSM was designed for the so-called second generation of mobile phones).

The big difference between GSM and GPRS was that the first was oriented to the audio transmission and the second to the data, and also through the SIM card of the cell phones allowed to assign an IP and therefore integrate the mobile as another device more in Internet, with its own identification. That is why the GPRS systems were also called generation 2.5, being an evolution of traditional GSM.

The GPRS has had and still has great popularity in M2M communication systems, in fact there are millions of industrial equipment, security, alarms etc. that use GPRS to date, however, this technology is being replaced by 3G and 4G to Systems of higher performance. However, the cost in industrial equipment of 3G / 4G modems means that GPRS is still used for equipment with low data transfer rates.

Luxiot uses GPRS as a cloud link via VPN for groups of luminaires. Which use LORA or PLC-PRIME to reach that link.

Thread is an IP-based wireless protocol designed for devices connected to the IoT to be discovered and communicated with one another.

Last year, the founding of The Thread Group was announced with the participation of ARM, Samsung, Freescale Semiconductor or Google Nest Labs. The goal was to work on a wireless network protocol designed that allows the devices that support it to meet and communicate with each other in an IoT ecosystem.

The group now has more than 160 members and the protocol is now available for both partners and other groups, such as the Open Interconnect Alliance (OIC) or the Industrial Internet Consortium (IIC). So there are technical specifications and documentation to create products that support the protocol, so the first offers are expected by the end of this year.

Thread, which uses standards such as IPv6 and 6LoWPAN, has the ability to easily and securely connect hundreds of devices to a mesh network – a network typology that provides more coverage and load balancing capabilities; Among the advantages of the network stands out its ability to scale up to hundreds of devices without failure points, which ensures that the connected devices are available when necessary.

Security is another point in favor of this protocol, as it is offered through high-level encryption. Finally, note that users will be able to connect Thread devices to each other and to the cloud through their Smartphone, tablet or PC.

Thread will allow to integrate different devices to the network of lightning, since it is an open protocol it is expected that this allows the incorporation of infinity of equipment to the Luxiot system.

© 2016 luxiot.eu All rights reserved
We use our own cookies and those of third parties to analyze user browsing. By continuing to browse, you accept the use of cookies. You will find more information in our Cookies Policy.I agreeSaber más